Recent felling of non-native trees in Woodheys Wood opened up the ground considerably to allow the planting of young native trees in and around the same area. The clearance of the dense canopy will also give established saplings the chance to thrive.

On Thursday, 29th March, in fine dry weather, the Friends of Woodheys Park volunteers worked with a tree specialist and volunteers from Amey, to plant 200 Hazel (Corylus Avellana), 20 Guelder (Viburnum Opulus) and 15 English Oak (Quercus Robur) whips. The photographs below are before, during and after.

A huge thanks goes to ‘Tesco Bags of Help’ who funded this project.

BEFORE – Dense canopy with no light getting through

AFTER – Volunteers planting the Hazel, Guelder and English Oak whips

Two established Pear Trees by the Kenmore Road service gate were recently vandalised and have been deliberately cut with a saw.  These trees were planted for the community to enjoy, now they’ve been reduced to nothing. Who would do that? 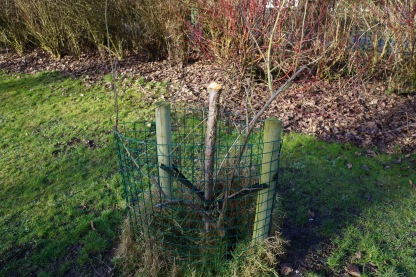 Felling of non-native trees, please click on the link above for more information.

ROUND UP OF ACTIVITIES AND EVENTS FOR 2017

This has been a year of celebration in the park. We want everybody to know just how busy The Friends Group and other volunteers have been and what they’ve achieved over the last 12 months. Their hard work was recognised by the park retaining its prestigious Green Flag Award status – Green Flag Certificate

The Friends Group is looking for regular volunteers, please click on the link below for more information.

The Pitch and Putt course is now open. Thanks to our Golf Attendants, the two Grahams, the Pitch and Putt is ready to welcome you to come along and test your skills. The option to pay by credit card is now being offered, but of course, cash is equally welcome.

Walking for Health is a national scheme and part of the Ramblers Association. The aim is to get more people of all ages out walking on a regular basis. All walkers must register at the start of each walk and sign a disclaimer that they walk at their own risk. Walks are held every Wednesday, meeting at around 10.15, leaving at 10.30 am and they will take 1 – 1.5 hours (2.5  – 4 miles) depending on abilities, they are led by an Accredited Walker. There is no charge.  Please come along, talk as you walk, make new friends, this is a great social event. Free car park via Kenmore Road entrance.  For more information, please click on this link: Walking for Health Website

Please click on the link below to see the report and accounts statement.

Help to keep your park tidy by using the Trio and Broxap Bins.

What can be recycled?

For more information and a video, please click on this link:

Please note that the Pitch and Putt is operated by AMEY.  Should you have any issues, please contact Trafford Council directly at:

and not the Friends Group. Thank you.